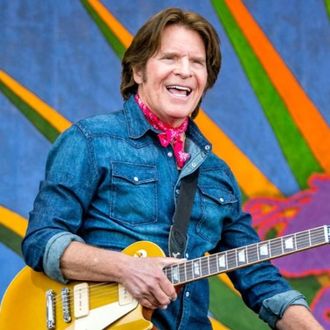 Weeks after expressing annoyance that Donald Trump repeatedly used “Fortunate Son” as part of his campaign trail soundtrack, swamp rock daddy John Fogerty has decided to issue an official cease and desist order to the president. In a message posted to social media on October 16, Fogerty, who penned the song during his Creedence Clearwater Revival years, stated that he “objects” to the president using “Fortunate Son” in any capacity, and not just because Trump doesn’t seem to understand the irony of the lyrics. “He is using my words and my voice to portray a message that I do not endorse. Therefore, I am issuing a ‘cease and desist’ order,” Fogerty wrote. “I wrote this song because, as a veteran, I was disgusted that some people were allowed to be excluded from serving our country because they had access to political and financial privilege. I also wrote about wealthy people not paying their fair share of taxes. Mr. Trump is a prime example of both of these issues. The fact that Mr. Trump also fans the flames of hatred, racism, and fear while rewriting recent history, is even more reason to be troubled by his use of my song.”

In addition to Fogerty, several prominent musicians have publicly issued cease and desist orders to Trump over the past few years due to campaign trail music choices. Most recently, this has included Neil Young (a personal favorite musician of Trump’s, funny enough), Ozzy Osbourne, Guns N’ Roses, and the estates of Tom Petty and Leonard Cohen. Young, who has been the loudest of these musicians in terms of pushback, went so far as to sue Trump for copyright infringement in August. Go and harvest that.